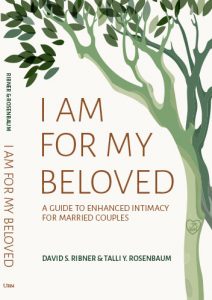 Reviews for “I Am for My Beloved: A Guide to Enhanced Intimacy for Married Couples” by David Ribner and Talli Rosenbaum

I Am for My Beloved, which focuses on married couples within the religiously observant community, is a book that is larger than itself. David Ribner and Talli Rosenbaum have found a way to discuss subjects that were once taboo and present them in a clear, direct and sensitive way to couples of all ages and religious orientations who want to enhance their intimate sexual relationships.
The authors of I Am for My Beloved make a wonderful contribution to the literature on the meaning of the sexual relationship in marriage. They begin with a discussion of the meaning of intimacy and how it is understood within the marriage relationship. They also suggest ways to achieve intimacy in the context of a healthy sexual relationship. Read more here.

During the COVID -19 pandemic, synagogues around the world have been closed, reopened and closed again for public safety, but there has been a concerted effort to ensure that the women’s mikve stay open. There is legitimate concern for mikve safety given the contagion of the virus. Some women have not been able to immerse for weeks, and in some cases months, for fear of contagion, leading to demands that rabbis find halakhic solutions. If mikves would become unsafe, what alternatives could be offered to the myriad couples who would be left in sexual limbo? How could we assist couples in need of mikva as part of their efforts to conceive, some of them desperate to become pregnant and unable to consider further delay? On the other end of the spectrum, the panic over enforced, ongoing abstinence has led to illegal, “pirate” mikves operating in some ultra-Orthodox neighborhoods which allow women immerse, whether they are in protective quarantine or even actually diagnosed in violation of health regulations and imperiling the health and lives of others.

The pandemic has brought many underlying issues to the forefront, and the rise in sexual awareness on the part of women is no exception. It has led to diversity of voices demanding a reevaluation of traditional sources that speak about women’s bodies, nidda, sexuality, fertility, and more. The last few years have seen a steady rise in resources having to do with sexuality geared towards the Orthodox population. Read more here.

Imagine one day, on the eve of the Pesach Seder, Eliyahu HaNavi issued a special hora’at Sha’ah, commanding all the Jews to eat a Ham and Cheese sandwich while reclining at the Seder instead of the usual Matzah and Maror.  Even the most devout believers would have great difficulty fulfilling this unusual directive without choking on their food. This is what marital intimacy can be like for a newlywed religious couple. All of the sudden, that which is taboo, is now permitted and even an obligation!

Drs. Ribner and Rosenbaum’s guide for marital intimacy is an important countermeasure to forestall and assist religious  in their journey toward intimacy and sexuality.  Ribner and Rosenbaum offer clear, no-nonsense instruction and education on the basics of emotional intimacy, physiological and anatomical facts, communication in the bedroom, common challenges, sexual dysfunctions, and life cycle concerns such as pregnancy, post-partum, illness, and aging for married couples. Read more here.